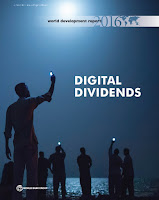 The World Bank's January Digital Dividends report assesses the extent to which information and communication technologies (ICTs) have contributed, over the past decades, to global development.  Its conclusion is that "while digital technologies have been spreading, digital dividends have not" (2).    It suggests two reasons for this: first, nearly 60% of the world is still offline, and, second, rising economic, social, and political inequality, all of which can be exacerbated by networks, stand in the way of full sharing in digital dividends.

The World Intellectual Property Organization (WIPO) has sometimes suggested that intellectual property is a "power tool" of economic development.  This view has long been challenged by those who note that IP comes with costs as well as benefits.  Costs can include higher prices in drugs and copyright materials, as well as reduced policy flexibility to respond to basic needs.  These costs, noted in a 2004 proposal by developing countries to WIPO, have now been acknowledged in WIPO's own formal Development Agenda.

The World Bank's report makes mention of intellectual property in several contexts.  It mentions:
The Bank's comments represent an view of IP that lacks nuance and balance, failing to take on board the extensive research done on the relationship between IP and development.  First, the World Bank's report, while noting the complexity of the relationship between ICTs and development, fails to take on board this same complexity when it comes to IP.  While arguing that innovation depends on IP, it fails to note the ways that IP can impede innovation (more on this below).

Second, Digital Dividends does not take adequately into account the ways that international IP regimes have failed to facilitate development and, at times, have stood in the way of development by impeding access to educational materials and pharmaceuticals.  The UK Commission on IP Rights long ago noted that "the interests of developing countries are best served by tailoring their intellectual property regimes to their particular economic and social circumstances" (156).  The Commission also argued that "there are strong arguments for greater flexibility in setting an optimum time to strengthen IP protection, taking into account the nation’s level of economic, social and technological development" (161).  International IP regimes take numerous options off the table when it comes to tailoring IP regimes; they greatly restrict states' flexibility in this regard.  The Commission called on developed countries to "discontinue the practice of using regional/bilateral agreements as a means of creating TRIPS-plus IP regimes in developing countries as a matter of course" (163).  This does not match with the World Bank's emphasis on the urgency of  further harmonization.

Third, the World Bank's report under-emphasizes the need for fair use and other limitations and exceptions to IP.  Here, Digital Dividends  utterly fails to take on board extensive research indicating the potential of such measures to contribute to development of various types, including development in the fields of education, health, innovation, technology, and clean technologies.

Jeremy de Beer and I have noted that the relationship between IP and development are a much more complex matter than the "power tool" view suggests.  Too much protection can be as bad as not having enough, contributing to gridlock (where IP is held by too many different people such that it impedes efficient market transactions) and high costs to the inputs of innovation (77).  (IP protection may also be irrelevant to encouraging innovation, if IP services are not available, as Rutenberg notes.)  Models of IP that emphasize access and openness in intellectual property can, de Beer and I argue, facilitate collaboration, universal participation, and adaptation of products to local communities (80).  Further, we note that IP can facilitate the concentration of wealth in the hands of multinationals (77).  Such inequality is exactly, as the Bank itself notes, what stands in the way of the potential of digital dividends.

Posted by Sara Bannerman at 3:31 PM No comments: