Sci-Hub and the history of copyright in scientific works

Sci-Hub, the "Napster for academics", is a project based in the notion that scientific knowledge should be made freely available.  John Willinsky, in his recent article for TimesHigherEd, quotes from a letter sent by Sci-Hub's founder, Alexandra Elbakyan,  in which she explains why she founded the hub:


Elbakyan explains that as a student in Kazakhstan, she found the “payment of $32 [Elsevier points out that it’s as high as $41.95] is just insane when you need to skim or read tens or hundreds of these papers to do research”. She adds: “I could obtain any paper by pirating it so I solved many requests and people always were very grateful for my help.”

Willinsky argues, "This right to know is also behind this new, emerging academic publishing economy. It is aligned with the broader social and intellectual movement of open science."

However, the founder of Sci-Hub is currently being sued by Elsevier for copyright infringement.

As Willinsky notes, Elbakyan carries on a tradition of civil disobedience that represents "a 10-fold escalation of the tragic protest of Aaron Swartz, a gifted US computer scientist and entrepreneur who committed suicide two years ago after being charged with theft for downloading 4 million journal articles to his laptop." Her efforts also reflect a sentiment that can be traced right back to the founding of the international copyright system, to before a time when copyright took a wrong turn.

Posted by Sara Bannerman at 1:00 PM No comments:

Here is the poster for my upcoming talk for students at Ryerson University's School of Creative Industries' CREA T.O. speakers' series about my new book, International Copyright and Access to Knowledge.  Thanks to Ryerson student Daphne Chan, who created this terrific poster! 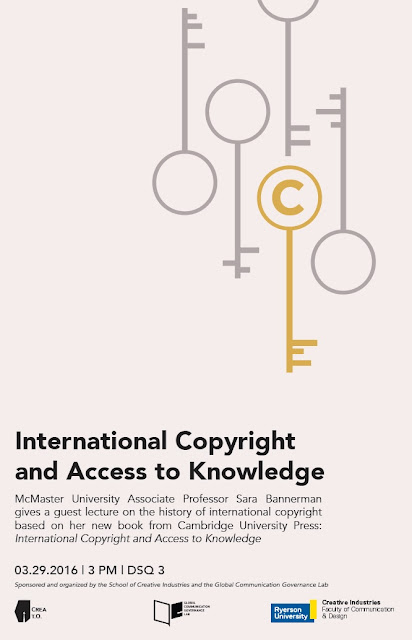 Posted by Sara Bannerman at 9:54 PM No comments:

My new book, International Copyright and Access to Knowledge,  is now available from Cambridge University Press. 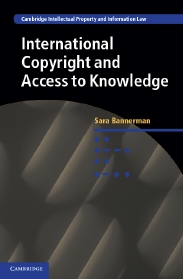 The principle of Access to Knowledge (A2K) has become a common reference point for a diverse set of agendas that all hope to realize technological and human potential by making knowledge more accessible. This book is a history of international copyright focused on principles of A2K and their proponents. Whilst debate and discussion so far has covered the perspectives of major western countries, the author's fresh approach to the topic considers emerging countries and NGOs, who have fought for the principles of A2K that are now fundamental to the system. Written in a clear and accessible style, the book connects copyright history to current problems, issues and events.

"Sara Bannerman's thoughtful and compelling book is a must-read for all of those interested in the challenges of increasing access to knowledge. She offers historical perspective on the narrowing of the knowledge commons and identifies opportunities for positive change going forward."
-Susan K. Sell, George Washington University


International Copyright and Access to Knowledge is available through CUP, Amazon, on Wordery. An excerpt is available here.  Purchases through CUP can make use of 20% discount code Bannerman2015.
Posted by Sara Bannerman at 8:10 PM No comments: