The government of Argentina has submitted an important proposal in current negotiations towards an international instrument on limitations and exceptions to copyright at the World Intellectual Property Organization (WIPO).

Most international treaties seek to establish minimum standards.  In the case of the current WIPO negotiations, relating to exceptions and limitations to copyright for education and research institutions and persons with disabilities, this means that all countries would agree to permit a minimum set of things, such as permitting photocopying for classroom use or reproduction for classroom display.

As the Argentinian government notes, this often does not go far enough, especially in the online context, since countries invariably differ widely in their implementation of such minimum standards, and digital transactions often involve multiple country jurisdictions.

Many everyday actions done in the context of educational institutions potentially involve multiple jurisdictions, and could be legal in one jurisdiction but not in the other:
Understanding the legality of any of these actions, along with many others, currently involves expensive legal analysis of the copyright regimes of multiple countries--an untenable situation for educational institutions, as the Argentinian government notes.

Argentina therefore proposes that "within the scope of a treaty on limitations and exceptions, lawful conduct in one territory should not be illegal in another. If reproduction or making available is valid under the treaty, it cannot then be invalid under the rules of another State jurisdiction." (p. 4).  The exact wording of the proposal is as follows:


Where performed in accordance with the exceptions and limitations set forth in this agreement, the reproduction or making available of a work shall be governed by the law of the country in which the reproduction or making available occur, without precluding the reproduced work from being delivered to or used by a person or institution benefitting from exceptions and limitations located in another Member State, provided that such delivery or use is consistent with the terms and conditions set forth in this agreement. (p. 4).

The Argentinian government has proposed a solution worthy of serious discussion at the WIPO meeting to be held next week.

Posted by Sara Bannerman at 1:56 PM 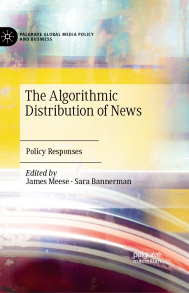 The Algorithmic Distribution of News (2022)